CHINESE REAL ESTATE firm Dalian Wanda is to inject 500m yuan ($77m) into football in China after a three-year agreement was agreed with the Chinese Football Association (CFA). 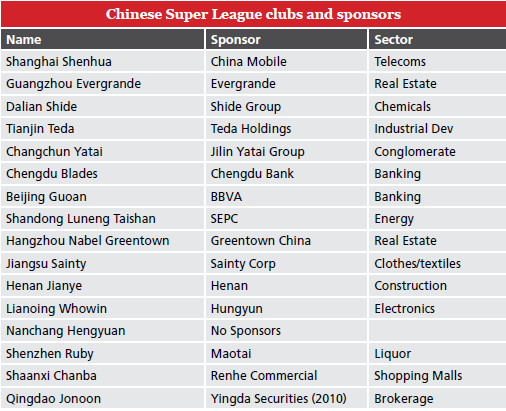 Under the deal, Wanda will title sponsor the league, which will be called the "Dalian Wanda Plaza Chinese Super League (CSL)" from the 15th round of this season to 2013.

This title sponsorship component of the deal is worth around 65 million yuan ($10m) each season, meaning that the bulk of the “sponsorship” money will go to a professional and grassroots game development plan, envisioned by Wang Jianlin, the billionaire chairman of Dalian Wanda.

Under the plan, Wang has agreed to fund a youth programme called “Future Stars”, which will provide 100 young players per year with opportunities to play overseas in Spain, Germany, Brazil, Italy and France.

Wang also aims to boost youth participation at the grass roots, attendances at league games, referee training, and aims to fund foreign coaching to help the men's and women's national teams. Reportedly, 40 million yuan ($6m) will be made available to lure a world-class foreign coach to join the national team on a three-year contract.

Except for the title sponsorship rights, Wang says his cooperation with the CFA is non-profit support.

The Property
Until the start of the 2011 season, the CSL was known as the Pirelli Chinese Football Association Super League. Pirelli signed as the title sponsor in March 2009 in a three-year deal with the Chinese Football Association reportedly worth €5m per annum, ending 2011. However, after a series of match-fixing scandals in 2009 and 2010, national broadcaster CCTV stopped broadcasting games of the 2011 Super League, and Pirelli pulled out. Other league sponsors include Nike, Shandong Lingong (a metals company) and Harbin Beer.

The Deal Makers
With assets worth an estimated $21.7 billion through its ventures in commercial properties, luxury hotels, chain stores and tourism, Dalian Wanda’s rescue plan for Chinese football was instigated on the urging of government officials, with negotiations taking place directly with Wang Jianlin at the political level before the CFA itself was ready to negotiate. Wang was closely involved in all aspects of the deal. An avid football fan, Wang funded professional club Dalian Wanda, the winners of four domestic titles in the 1990s, before exiting the sport (vowing never to return) in disgust at the prevalence of match-fixing. Asian sports marketing agency World Sports Group, the CFA’s strategic marketing partner at the national team level, was not engaged in the deal.

The Clincher
Chinese soccer's popularity hit a new low at the run to the year following adverse publicity on and off the pitch. Aside from the match-fixing and bribery allegations, the national team has performed well below expectations, while the Olympic men’s team failed at the first hurdle in attempting to qualify for the London 2012 Olympic Games.

Without any other serious bidders, Dalian Wanda was able to buy a position as potential saviours of Chinese football at a relatively modest price. Except for the title sponsorship rights, Wang says his cooperation with the CFA is non-commercial, yet the move has clearly boosted Wanda's and Wang's image, earning widespread public and government support.

This could be all the more valuable according to one Chinese press report, since the vice-president of China’s ruling Communist Party, Xi Jinping - who is widely expected to take over as the country’s President next year - is reportedly a football fan. What it means Cleaning up the image of soccer at the top level in China and delivering success on the pitch are pre-requisites for greater commercial support going forward. Wang’s focus, however, is primarily on improving China's national team in cooperation with the CFA, which has also signed with World Sport Group (WSG) to further develop the national team’s profile.

WSG will produce an extensive fixture schedule for ‘CFA Team China’, as well as providing support to increase commercial revenue and to raise the profile of the sport in the country.

While this could include the inclusion of international brands (BMW and Hilton HHonours, for example, are partners of the Chinese Olympic Committee) at the club level, foreign brands have less opportunity to explore team sponsorship since the corporate owners typically claim the team name and shirt sponsorship for their brand too.

This is especially true of the new corporate money in the Chinese Super League, which has come largely from domestic real estate development firms like Evergrande (Guangzhou Evergrande) – the biggest real estate group in China - Renhe Commercial (Shaanxi Chanba) and Greentown (Hangzhou Nabel Greentown) all of which have funded eye-catching deals in the international transfer market this year.

Spanish bank BBVA, shirt sponsor of Beijing Guoan, is the exception that proves the rule.

General Motors-owned car brand Chevrolet will pay around R21m (€6.9m/$9.5m) per year for the title sponsorship rights to Brazilian football’s first and second division leagues, for five years, from 2014 to 2018, in a deal agreed in April.

VBet extends with AS Monaco

Online sports betting company VBet has extended its sponsorship of French Ligue 1 club AS Monaco for three more years, from 2022-23 to 2024-25
Matthew Glendinning
18 May 2022
Football

China’s withdrawal as host of the 2023 Asian Cup has undermined some of the most valuable commercial rights deals for the Asian Football Confederation in its 2021-24 cycle, potentially leaving the body f…
Kevin McCullagh
18 May 2022