Barclays bank will end its title sponsorship of the English Premier League when its current £40m (€49m/$67m)-per-year contract concludes at the end of the 2015-16 season, Sports Sponsorship Insider understands.

Rumours that the bank was considering ending its partnership with the league emerged last month but it was thought that the bank’s chief executive, Antony Jenkins, had yet to make a final decision on it.

A well-informed source told Sports Sponsorship Insider this month that Barclays has already decided that the deal has “run its course.”

Senior figures at the bank are understood to have decided that the sponsorship no longer ties in with the five core values that the company revealed at the beginning of 2013 as part of a new brand direction. The core values are: respect, integrity, service, excellence and stewardship. It is thought that consumers would not associate the amount spent by the bank on the Premier League with these values.

Barclays is also understood to feel that it has maximised the brand exposure it can get from the property.

When contacted, Barclays declined to say whether it had made a final decision on the deal. “The main thing is this is the first year of a three-year contract – renewal discussions are still some time off,” Andrew McDougall, the bank’s senior sponsorship PR manager, said.

Sponsorship industry experts highlighted other factors which might be encouraging Barclays to end the partnership. “Barclays is now synonymous with football in England,” a source told us. “Much like Guinness in rugby, it could continue to use football to create value without the spend of the title partnership.”

Barclays’ global rights under the deal means it is effectively paying for rights in many countries in which it doesn’t operate, Steve Martin, chief executive of M&C Saatchi Sports & Entertainment, said. 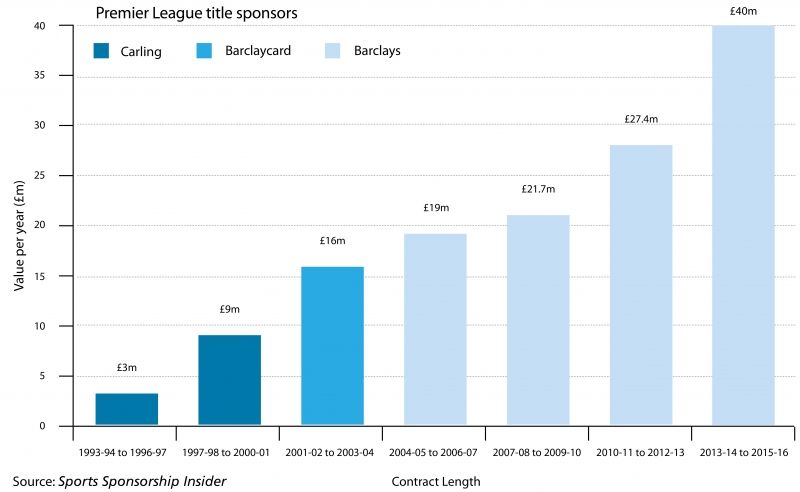 All industry experts that Sports Sponsorship Insider spoke to this month said the value could rise further in the 2016-17 to 2018-19 cycle. A source close to the league said it believed a deal worth over £50m per year was possible.

Interested brands have begun approaching agencies to discuss the possibility of bidding for the sponsorship. The price of the position and the need to activate globally means it is only a realistic aim for a handful of companies, Martin said.

Under its current contract, Barclays receives extensive marketing rights, including logo and name presence in UK and international television broadcasts. advertising rights, tickets and hospitality. Unlike Barclays’ previous deals with the league, its current one does not have an exclusive renewal negotiation period.

Santander extends move from F1 to football with UCL deal

Spanish banking group Santander has become an Official Sponsor of the Uefa Champions League for the three seasons from 2018-19 to 2020-21.

Former Wimbledon marketer Alex Willis will start her new role as director of digital media and audience development at the Premier League next week with the goal of “helping to drive its future relevance”.
Matthew Glendinning
18 Aug 2022
Football