Valued at £10m per year, the deal is roughly half the annual sum paid by American financial giant AON to sponsor United's playing kits and exceeds the value of all but four of the main shirt sponsorship deals in the Premier League.

Without precedent in the English Premier League, Manchester United chief executive David Gill said of the agreement: “This deal breaks new ground in the English game.” 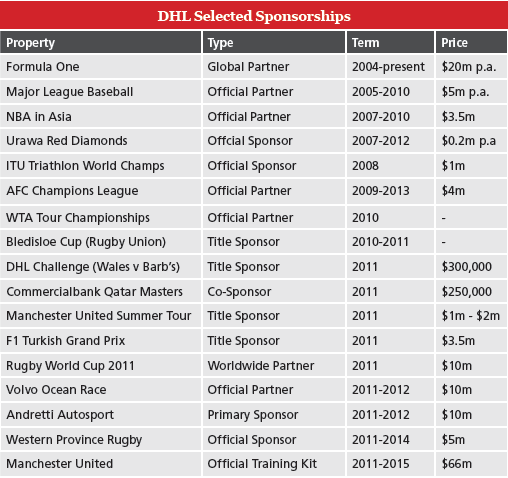 The new four-year deal sees the DHL logo included on the clubs’ training kit worn by all first, reserve and youth team players during domestic competitions.

The contract covers domestic use only, so excludes the Champions League where broadcasters typically get more access to pre-match training. As part of the deal, DHL will take a deeper role in distributing United's vast range of merchandise, including shirts and match programmes, across the world.

From United’s side, the commercial relationship with DHL was initially built between the club’s commercial director Richard Arnold (who reports to Chief of Operations Edward Woodward) with consulting from WPP’s Mindshare, led by Sean Jefferson, global head of Entertainment, Sport and Partnerships. The execution of the rights package, however, was brokered directly between the club and DHL.

The European division of the Bonn, Germany-based company, owned by Deutsche Post, drives the company’s international sponsorship strategy with Pearson, formerly executive vice president Commercial, DHL Express USA and commercial director for DHL Asia Pacific, leading the board on the sign off of major marketing initiatives.

MEC Access, DHL’s activation partner on previous sports campaigns, was not involved at the negotiation stage.

DHL had already taken the original Official Logistics Partner relationship into new territory as title sponsor of this summer’s US pre-season tour, which attracted a total of 290,000 spectators and succeeded in its aim of promoting DHL in major US markets and reinforcing DHL as specialists in International.

With the training kit identified as an untapped resource, the valuation by United was key to taking the relationship even further. Mindshare’s Sean Jefferson explains the process: “Manchester United approached us to come up with a valuation for the deal based on current market value or, as Richard Arnold said: ‘to realise the untapped value’.

“Although it is a training kit deal, two thirds of DHL’s television exposure with Manchester United comes from the boards around the pitch and the interview backdrop spaces.

“If the reported deal cost is there or thereabouts (quoted at £10m per year over four seasons), the media value or the ROI is several times that and is already being delivered.”

Apart for an obscure deal involving a waste disposal firm and non-league club Stockport County, the training kit deal does indeed break new ground in the English game and vindicates the claims of the Glazer family owners who said they would bring American commercial practices into English football (see Practice Jerseys).

“It is impressive the way the club is handling their commercial activity,” says Jefferson. “They have looked at the way other clubs are recruiting sponsorship partnerships and have said ‘we are going to do it differently’.

“This doesn’t mean over-cluttering the club’s assets with logos, it still has to remain premium, but they have stolen a march on other clubs, and sports, by identifying and selling a wider range of assets in a wider range of markets.”

But will other clubs follow suit on training kit deals? “They’d be mad not to,” Jefferson concludes. “It might be seen as a case of piggybacking a trend but if a team can sell it they probably will. However, it’s unlikely other clubs would receive the same kind of value as Manchester United.

“What’s interesting though is that Manchester United’s training kit was previously unbranded. Take Chelsea’s training kit for example. Their principal sponsor already has their branding on them, and therefore it is not a property the club can sell…yet.” 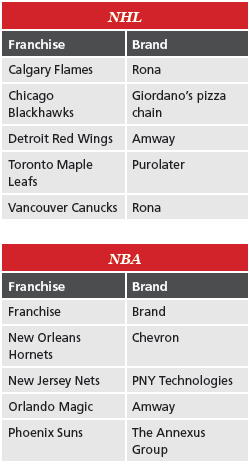 Financial services company UniCredit is in talks to renew its partnership with the Uefa Champions League for the 2015-16 to 2017-18 cycle, after a strong return on investment from its current deal.

PepsiCo’s positioning of its Gatorade sports drink brand at tomorrow’s Uefa Women’s Champions League final is aimed at brand building rather than sales, according to the sponsorship lead at the food and b…
Matthew Glendinning
20 May 2022
Football