The key elements of the agreement include the renaming of the City of Manchester Stadium, which will now be known as the Etihad Stadium, forming the centrepiece of a newly-named Etihad Campus, which encompasses a large part of the Sportcity site in east Manchester.

Under the deal, Etihad Airways also extended its shirt sponsorship to reflect “an increased media value due to the Club's improved on-pitch performance in the 2010-11 season”.

The Property
The £110m City of Manchester Stadium, paid for by the taxpayers of Greater Manchester (£33m) and lottery revenue (£77m), was built to host the 2002 Commonwealth Games. The stadium is owned by the City of Manchester Council, which agreed to lease the stadium to City from 2003 for 250 years. Experts have made best estimates that the naming rights component comprises £10m, the Campus another £10m, with the shirt sponsorship worth £20m per year. 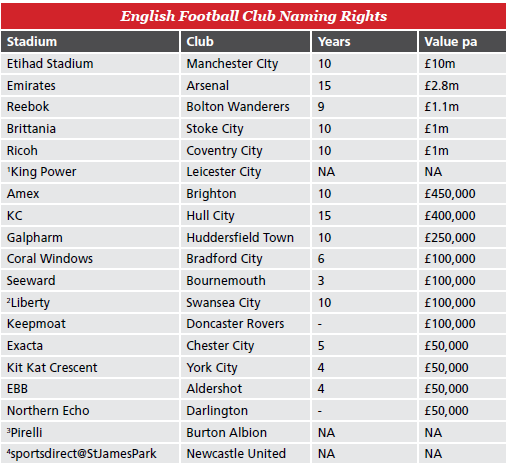 The Deal Makers
Unlike Arsenal FC’s naming rights deal with Emirates, signed in 2004, which was heavily marketed by Wasserman Media Group, research by Insider suggests that that the above sponsorship inventory was never put on the open market by City or an associated agency. Reliable sources from agencies with brand clients that would normally be contacted for such a major sports property say they were not approached.

Etihad’s Chief Commercial Officer, Peter Baumgartner is credited with negotiating the deal directly with the airline’s executive counterparts at City. Baumgartner told the Abu Dhabi-based sports magazine Sport 360: “It went from brain storming, scoping and into strategy alignment and so on. To put everything together took about four to five months.  So it was relatively short.”

Although bound by confidentiality, it is likely that the Abu Dhabi-based agency, Professional Sports Group, the sole sponsorship agency for Etihad Airways globally and advisor to the brand them on all their international sponsorships, played some advisory role in the deal.

The Clincher
There are two reasons why the deal was done at the price it was done.

Firstly, it is clear that City needs to build forward revenues to comply with UEFA’S Financial Fair Play (FFP) Rules limiting owner investment, which come into affect from this season.

Secondly, City owner Sheikh Mansour bin Zayed al Nahyan is a member of Abu Dhabi’s ruling Al Nahyan family, which holds the reigns of power in the Abu Dhabi government, owner of the state-carrier Etihad Airways. This familial connection between club owner and sponsor brand is the main reason why some observers have called foul in terms of FFP.

Baumgartner continued: “With the confidence of the Abu Dhabi involvement, as a sponsor we knew what to predict in terms of the development the team would make moving forward. We had the opportunity to lock in sponsorship at the market value of that time with a lot of confidence and reassurance that the team would make progress, which would increase the exposure and value of the deal. In effect we had progress reassurance.”

What does it mean?
Manchester City's naming rights deal with Etihad should not be seen as a new benchmark in UK naming rights values because there is no evidence that the rights tender went to the open market. This, however, does not mean that the deal will fail to comply with FFP rules, which state only that the sponsor should pay a “Fair Value” not a” Fair Market Value”. The means that questions on whether the property reached the open market or whether other bidders were involved are largely irrelevant.

Even if it the figures were judged on market precedent it would be quite possible to argue that Etihad paid a reasonable price.

The nearest comparable deal, Arsenal’s naming rights agreement with Emirates, has been widely cited as proof of Etihad’s overpayment, but the £100m paid by Emirates over 15 years to badge Arsenal's new stadium (less £48m for the shirt sponsorship) in 2004 included a sizeable proportion up front, which drove the value down.

Did Under Armour overpay?

The value of the Uefa Champions League’s automotive partner position will increase by at least 33 per cent in the 2015-16 to 2017-18 cycle following its deal this month with carmaker Nissan.

YINGLI SOLAR, WHICH became the first renewable energy company and the first Chinese company to agree a global FIFA deal with its sponsorship of the 2010 World Cup in South Africa, has extended to Brazil…
SportBusiness Staff
30 Jun 2011