IT software company SAP became the sixth Premium Partner of the Deutscher Fussball Bund, the German football federation, in March in a five-year deal to the end of 2017, thought to be worth around €2m ($2.6m) per year.

SAP replaced Japanese consumer electronics company Sony as the sixth Premium Partner. Sony opted not to renew its three-year deal which expired at the end of 2012.

SAP’s deal is cash-only, with no value-in-kind element.

The company’s sports sponsorship strategy is to sponsor properties that are also its customers. In a separate  deal with the DFB, the company has installed new software to improve the federation’s ticketing and customer relationship management (CRM) systems.

“Since January we have been promoting our offering in sports and are looking for ways to market it,” Lars Lamade, project manager at SAP for the DFB sponsorship, told Sports Sponsorship Insider.

“The best way to sell it is by reference from customers and the DFB is one of the most well-known sports organisations worldwide and will be a perfect reference customer for us.”

SAP is helping the federation manage its databases of customer information.

“Our main challenge is that we have many databases,” said Patrick Kisko, the DFB’s head of sponsorship. “There are databases for people who buy tickets, items from the fan shop, sponsor databases, fan clubs with their own data and DFB website users.”

Other high-profile clients and sponsorship partners of SAP include North American basketball league the NBA, American football’s NFL, the McLaren Mercedes Formula One team and the SAP Extreme Sailing Team.

These deals are managed and paid for by SAP’s global marketing team in New York. The DFB sponsorship contract is managed out of SAP’s headquarters in Walldorf, Germany. 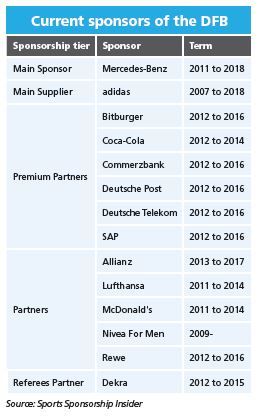 DFB seeking deals
One third-tier DFB Partner position, one package of rights to use German national team players in television advertisements and a Main Sponsor position for the third-tier Regionalliga league remain on the market from the DFB.

Kisko said the energy sector is an open category for the DFB and a possibility for a Partner deal. A deal is expected by the end of 2013.

Insurance company Allianz is the highest-paying DFB partner. It is also the Main Partner of the women’s national team. Both sets of rights are covered by the same contract.

Rights to use the German national football team in television advertisements are available to a maximum of four sponsors, and only to Main Partners and Premium Partners. Sponsors must pay an additional fee for the rights.

Kisko said the fourth slot will be sold to “one of a few” interested Premium Partners in the next few months. SAP is not one of these. Mercedes-Benz, adidas and Bitburger have already bought advertising rights.

“We have to inform the national team of our marketing activities around the 2014 Fifa World Cup by August this year,” said Kisko. “And the production of the adverts will start in the winter.”

The Regionalliga is currently without a Main Sponsor. The DFB manages the sponsorship rights to the German third division only. Most sponsorship rights for the top two divisions – Bundesliga 1 and 2 – are managed by the Deutsche Fussball Liga.

One sponsorship rights category  that the DFB controls across all divisions is the branding on referees uniforms. This is a standalone ‘tier’. Vehicle safety inspection company Dekra is the current Referees Partner. It has branding on the officials’ uniforms during matches in the Bundesliga, Bundesliga 2, the DFB Cup, the women’s league and the women’s cup final.

Dekra is paying a higher annual rights fee than any DFB Partner, but less than any Premium Partner.

Allianz steals the show in Munich

Nutrition brand IVC signed a multi-year deal in October to become English Premier League club Manchester United’s first Official Chinese Wellness Partner and the fifth regional partner to have signed up or renewed during the 2014-15 season.