THE ATP WORLD TOUR, the men’s professional tennis tour, secured a small increase in the value of its official airline sponsorship rights in a deal with Emirates agreed in December. 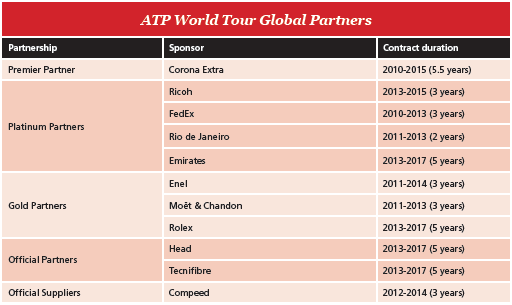 Dubai-based Emirates agreed a five-year deal, from 2013 to 2017, and replaces South African Airways as the Tour’s Official Airline.

“We tend to work on three-year business plans and budgets and there is clearly a continuing uplift in sponsorship revenues for 2013, 2014 and 2015,” Laurent Delanney, the chief executive of ATP Europe and the global commercial director of the ATP, told Sports Sponsorship Insider.

At the same time as it agreed the Global Partner deal with Emirates, the Tour brokered separate deals between the airline and several tournaments. In one of these, for example, Emirates became a second-tier sponsor, or Platinum Sponsor, of the season-ending ATP World Tour Finals.

The Tour’s central sponsorship revenues fell 42 per cent between 2008 and 2009, from $38 million (€28 million) to $22 million, according to the Tour’s official tax return, after car maker Mercedes-Benz ended a 12-year association with the tennis property. Mercedes had been the Tour’s biggest sponsor, in the top-tier Premier Partner category.

But according to Delanney, the income stream has recovered by 165 per cent between 2009 and the end of 2012, meaning that the Tour’s sponsorship revenue was estimated to be around $60 million.

The growth in 2013 to 2015 will come from new deals with Emirates, watch maker Rolex and tennis equipment manufacturer Tecnifibre, as well as incremental rises in rights fees in existing deals.

Further Global Partners could be added to the Tour’s portfolio in the 2013 to 2015 period. The Tour’s commercial team is actively pursuing sponsorships in the information technology and automotive sectors, Delanney said.

For Emirates, the ATP Tour partnership will be the pinnacle of the brand’s growing list of tennis sponsorships.

“We were looking for something to unite all of our tennis properties,” Roger Duthie, Emirates’ head of global sponsorship, told Sports Sponsorship Insider. “Our tennis portfolio grew rather quickly over the last few years with the Rogers Cup, then Indian Wells, then the deal with the US Tennis Association for the Emirates Airline US Open Series. We also have the Rome Masters and the event in Dubai, [the Dubai Tennis Championships] but it was all a bit piecemeal so we really needed something to tie all of those things together.”

Emirates’ involvement in tennis began in 2007 with the Rogers Cup in Canada after the brand identified the need for association with a sports property in Toronto. The North American market has been a particular target for Emirates because it has been looking to develop more flight routes in the region, a strategy which has been reflected in its sponsorship deals.

“For Emirates, it’s all about building the brand in North America,” says Duthie. “The reason we did the Emirates Airline US Open Series is because it covers 10 markets for us in America.”

The airline initially targeted National Hockey League team the Toronto Maple Leafs as a result of Duthie’s passion for the team – Duthie is a Canadian, working in Dubai. But the airline decided against investing in ice hockey, believing it to be a cluttered sponsorship market, and tennis was selected as the best fit for the Emirates brand.

“With each of our events it allows us to get our brand message to the attending public, the television audience, the media and VIPs over almost a two-week period,” Duthie said. “That’s a pretty powerful opportunity.”

The marketing benefits in Emirates’ deal include associations with the ATP’s central marketing initiatives – which are rights only given to the Tour’s Premier and Platinum Partners – as well as the title sponsorship of the ATP World Rankings, logo appearances in television graphics during ATP Tour television broadcasts, and digital and social media elements.

Sponsorship revenue from the ATP World Tour Finals will rise to around £15m (€18m/$24m) this year, comprising around 25 per cent of the Association of Tennis Professionals’ total sponsorship income in 2013.

Kooyong Classic to return in 2023 with new title sponsor

Melbourne tennis tournament the Kooyong Classic will return next January after a two-year hiatus due to the pandemic
SportBusiness staff, Asia
13 May 2022
Tennis

Renault takes over from Peugeot as Roland Garros car sponsor

French carmaker Renault has signed as a premium partner of the Roland Garros tennis grand slam tournament for five years, from 2022 to 2026
Matthew Glendinning
28 Apr 2022