Vodacom’s mega-deal for Chiefs and Pirates

South African mobile telecommunications company Vodacom has extended its sponsorship of Soweto-based football clubs Orlando Pirates and Kaizer Chiefs in a five-year deal. Reported in the South African press to be worth R1 billion ($120m), Sports Sponsorship Insider understands that the value of the deal was significantly inflated in the domestic media. 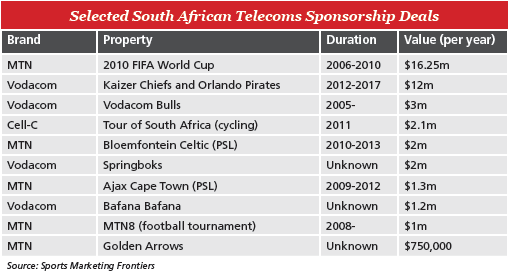 The two clubs will, in fact, receive around half that sum – R50 million ($6m) per year per club – as part of the sponsorship contract with the remainder of the value ascribed by the media being highly speculative. The R1 billion valuation stems from an aspect of the deal which will see the Chiefs and Pirates become retailers of Vodacom products and airtime.

The clubs suggest that this could earn them an additional R50m per year each  from Vodacom sales – a figure that is considered highly unrealistic by those closely involved in football sponsorship in South Africa. Regardless, the R50m per year each team will receive in direct rights fees makes the deal the most lucrative in the history of South African football. Vodacom has sponsored the two teams for the past fourteen years and the latest renewal marks the fourth time the partnerships have been extended.

Under terms of the previous five-year deal, Vodacom paid the Chiefs and Pirates around R30m ($3.6m) each per season.

The renewal will see Vodacom retain its status as front-of-shirt sponsor and principal partner of both the Chiefs and the Pirates – a position the brand has held with both clubs since 1998.

Kaizer Chiefs is the largest football club in South Africa, both in terms of fanbase (approximately 16 million) and historical success. Orlando Pirates, however, have been the more successful of the two in recent years, claiming the three major domestic trophies in the 2010/11 season and winning the Absa Premiership (PSL) this year. Together, the two clubs are the most popular sports teams in South Africa.

According to Eurodata TV Worldwide, seven of the top 10 most-watched sports programmes broadcast on South African public service television channel SABC1 between September 2010 and August m2011, featured the Chiefs or Pirates, with an average national audience of 5.75 million people.

Having initially agreed to be interviewed by Sports Sponsorship Insider on the subject of the renewed sponsorship, Vodacom subsequently decided it did not want to go into details of the deal and instead issued the following statement on behalf of Sipho Maseko: “This deal with Orlando Pirates and Kaizer Chiefs has been extended beyond a shirt branding agreement. We have teamed up with both teams to develop a complete range of connectivity products that will not only benefit the supporters but the clubs themselves in their race to maintain brand leadership.

“Over the course of our partnership, the combined influence of these powerful brands has brought about radical advances to the game that have seen Chiefs and Pirates leave the competition behind both on and off the field, while Vodacom is firmly  established as the telecommunications powerhouse in sub-Saharan Africa.

“It is the realisation of this commercial value within the soccer support base that will yield significant financial rewards for both clubs. Our shirt sponsorship agreement is just a portion of the revenue that the teams will receive.”

While Vodacom operates in four other African countries, including Tanzania, Lesotho, Mozambique and Democratic Republic of Congo, South Africa remains by far and away the brand’s biggest market with around 26.5 million existing customers – over half the national population (estimated by Statistics South Africa at 50.5 million in 2011). Concentrating its sponsorship activity in South Africa (see box off) seems logical for Vodacom. And investing heavily in the two biggest sports teams in the country is a simple example of a brand maximising an opportunity to exploit a large and dedicated fan base.

By this means it will consolidate existing custom and garnering interest in product development and new sales. While Vodacom’s Maseko suggests the value of the deal will “reshape the nature of sponsorship of sport in South Africa”, some observers have been critical of the deal. They cite the fact that there are very few properties, football or otherwise, that are likely to attract investment on such a scale. This will therefore put other clubs at a severe commercial disadvantage.

Jose Ferreira, chief executive of fellow Absa Premiership team SuperSport United, believes it will leave the rest of the league alienated: “I think if South African football has been in trouble for the last ten years it is because of the money pumped into the likes of Kaizer Chiefs and Orlando Pirates,” he told the South African daily newspaper BusinessDay. “When I hear of a R1 billion sponsorship, I think we are all in serious trouble. It is getting to a stage where all the other clubs are just there to make up the numbers. Chiefs and Pirates have made a huge contribution to South African football but the truth is that the game is going to be the biggest loser here.”

Whether or not the Chiefs and Pirates will receive an additional R50m per season remains to be seen, but the deal ensures their continued dominance of the commercial scene in South African football.

Vodacom Blue Bulls – Vodacom acquired the naming rights to the provincial rugby team in 2005. As part of the deal, Vodacom also holds the rights to Lotus Versfeld, the Bulls’ home stadium but has so far decided not to exercise its right to name the stadium as a gesture of goodwill to fans.

Vodacom Cup – widely regarded as the third most prestigious rugby union competition in South Africa, the tournament was created in 1998 and has been supported by Vodacom since its inaugural season.

Vodacom Challenge – As part of its agreement with the Chiefs and Pirates, Vodacom title sponsors a pre-season football tournament featuring both teams and, as of 2006, two invited European teams.

Will Vodacom’s dramatic increase in sponsorship rights fees to Kaizer Chiefs and Orlando Pirates “reshape the nature of sponsorship” in South Africa? The Vodacom deal grabbed the headlines in May, a result of the reported value to the two Soweto-based football giants. The details of how the sponsorship will reshape anything, however, are less clear. Vodacom has clearly made a strategic shift within its sport sponsorship portfolio towards platforms with more mass-market appeal, especially for their prepaid mobile services.

Enzo Scarcella (Vodacom’s managing executive)  has been suggesting for some time now that they would be making some “hard decisions” to redirect the company’s spend more strongly towards properties that allow them to engage more directly and emotionally with potential consumers. With millions of fans passionately following Chiefs and Pirates, Vodacom has gone with the biggest and loudest in town.

To reshape the nature of sponsorship more directly, it will be interesting to see whether Vodacom, Chiefs and Pirates develop a sponsorship versus revenues model, where the real business returns to Vodacom are linked to the payment of sponsorship instalments or bonuses. This kind of value-in-use rights fees structure has already made an appearance in the League, and would be the kind of reshaping that would be “game-changing”.

If Vodacom wants to achieve higher Average Revenue Per User within its less dominant pre-paid market, and defend themselves against increasingly aggressive competitors such as Cell C, they would need to quickly turn existing brand exposure and affinity into profitable revenues. Merely tripling their existing brand sponsorship of Chiefs and Pirates, who are still in the process of building robust fan engagement and direct communication platforms, is unlikely to achieve that.

A concern has also been expressed about the implications of this sizeable deal, especially on comparative player salaries within the South African Premier Soccer League. The longer term competitive rivalry within the League may need consideration should the gap widen further.

For the cup-winning Orlando Pirates and the pioneering Kaizer Chiefs, the enhanced Vodacom deal will make them even richer, while football development at local level and the performances of the national team struggle to keep pace. As prospective pan-African and global sporting brands, Pirates and Chiefs would be well advised to invest this windfall into stronger management capabilities, as well as a firmer commitment to competing in Africa.

The new League broadcast deal with SuperSport International, which will most likely include additional team-specific coverage and shows, may provide the perfect platform for these teams to build their brands beyond South Africa.

Should this global push take place using Vodacom’s mobile network and services, the future shape of sport sponsorship in South Africa could be in for a real change.

Nutrition brand IVC signed a multi-year deal in October to become English Premier League club Manchester United’s first Official Chinese Wellness Partner and the fifth regional partner to have signed up or renewed during the 2014-15 season.