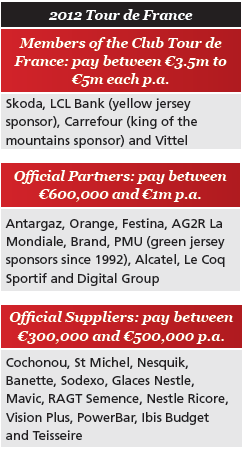 Insider values the sponsorship at between €6 million and €8 million per annum, roughly equivalent to 80 per cent of the 24-rider team’s 2012 budget.

The new deal guarantees the team security for four years but represents only a modest uplift on the previous deal on an annualised basis.

The team requires greater funding if it is to compete at the top level of the sport.

A member of the UCI ProTour since its inception in 2005, Cofidis was denied a top-tier license after the 2009 season due to poor results.

The short-term commitment of the sponsor, which had not then signed beyond the 2010 season, also influenced the UCI’s decision.

Since then, Cofidis has competed successfully on the second-tier Pro Continental Tour and hopes to rejoin the UCI ProTour in the future, despite a budget of around €3.5m less than the biggest ProTour teams.

Cofidis member of the directors’ board and president of Cofidis competition, Thierry Vittu led the decision to renew for the sponsor brand. His counterpart at Cofidis cycling team is general manager Eric Boyer, who is responsible for the cycling team’s funding.

“We remain in cycling because we haven’t found anything better in sport to promote our brand,” said Thierry Vittu in 2010.

At that point, Vittu, said that the step-down to the Pro Continental Tour level would not affect the company’s decision to continue or not as a major backer of the cycling team.

“Either we decide to stop [the sponsorship] and make sure the organisation (team) continues, or we commit to returning with a bigger budget and a longer duration of commitment,” he said.

Taking the latter course, Vittu signed off on the four-year deal knowing that Cofidis is always likely to be invited as a wild card pick for the Tour de France – if not the other Grands Tour events – the key to the sponsorship’s value.

Cofidis general manager Eric Boyer estimates that 80 per cent of the return on the sponsors’ investment comes during the Tour.

This is backed up by research from Flightdeck, the digital media tracker tool from Havas, which shows that Cofidis remains synonymous with French road cycling.

In cycling-heavy markets such as France, Cofidis holds a significant advantage (61 per cent compared to 39 per cent for Ag2r) in overall share of voice. With the Tour de France on the horizon this is a positive sign for the French money-lending giant.

French cycling has seen the number of its top-level teams diminish over the past few years. Just two of the 2012 UCI ProTour teams are from France – AG2R La Mondiale and FDJ-BigMat – down from four in 2005 (Credit Agricole, Cofidis, Bouygues Telecom and Française des Jeux) and a peak of five French branded teams in 2007 and 2008, when AG2R Prevoyance joined the top tier. Crédit Agricole terminated its sponsorship after 2008 and in 2010, Cofidis was joined on the Pro Continental Tour by Bbox Bouygues Telecom.

Although relegated teams and their sponsors can take some consolation that French teams have a comprehensive national programme of races to attend – and preferential status in terms of Tour de France wildcards – funding limitations threaten to diminish the prestige of the sponsorship association.

At the start of the year, Cofidis general manager Eric Boyer, said a merger with a larger team would be a practical solution to the team’s relatively small budget and inability to attract top riders to regain its place in the ProTour.

“This year we have seen mergers between some great teams: RadioShack and Leopard-Trek, Quick Step and Omega Pharma,” he said. “I have had this discussion for two years. We began by giving it lip service. Last year, it was more serious. I hope we can go through with our idea at the end of the year.”

The emergence of well-funded national champions, notably Sky Procycling (Britain) and GreenEdge (Australia) in 2011, Katusha (Russia) in 2009 and Astana (Kazakhstan) in 2007 has also put the squeeze on French-owned teams.

“I think the situation will continue. The Tour will no longer be able to satisfy all the French teams,” Boyer said, adding that the chances for the French teams could decline further in 2013.

“More and more foreign teams are built with a budget at around €12m. They have great champions, who are expensive. The organisers cannot do without them.“

Board Report by Jared Melzer, Sports Marketing and Sponsorship Consultant

When HTC failed to renew its sponsorship after the conclusion of the 2010 season, the cycling community was bewildered. How could the most successful team over the past few years not renew HTC or find a new sponsor?

If only winning directly correlated with the sale of more HTC phones and the achievement of objectives. The true issue lay in the fact that there was no strategic marketing platform in place to help enable companies become more successful, effective and efficient.

The renewal of Cofidis is a welcome sign for cycling - and there appear to be strategic reasons why Cofidis should associate with the sport, despite the team’s competitive problems.

– In the struggling European economy, people are increasingly relying on financial supplements and loans to live. Combined with a desire to customise these loans via the ease of the internet and telephone, the business model is quite attractive. In addition, Cofidis has introduced new products including payment solutions and banking services (current and savings accounts, on-line stock exchange and investments).

Sponsorship is certainly a great vehicle to introduce these existing and new products and services.
– Cofidis is committed to “building a sustainable relationship with customers, as well as combating exclusion”. Cycling in Europe is the sport of the people. Cyclists perform on the public roads; there’s no fee to watch and fans can literally be part of the action and directly interact with riders before the race. There are very few sports that provide the same level of fan-rider access. It’s also very easy to identify with the professional cyclists, as the majority of them don’t even make six-figure salaries.
- Cofidis’ social responsibility is focused on “limiting the impact of activities on the environment.”
While the professional sport has a large carbon footprint with the vehicle caravan, the activity itself is very green. Many cycling fans own bikes and this encouragement from a cycling team to ride has personal health and environmental benefits. While registered as a French cycling team, Cofidis has expanded into cycling-centric countries, including Belgium, Spain, Portugal and Italy. With races, fans and media coverage in these countries,
Cofidis has the ability to activate on international, domestic, regional and local levels.
– Despite the issue of doping and some negative media coverage, viewership and fan interest in the sport remain strong. The fans have not departed. With the marquee race in cycling being the Tour de France, 15 million people line the streets and mountainsides to cheer on their favorite teams. At each start and finish, there is an opportunity to directly engage and connect with consumers. Essentially,
each race mirrors a traveling festival.
– The value for the money is very strong. With a total team budget around €9.5m, Cofidis is most likely contributing the large majority (probably €6m-€8m per year) for title naming rights. When you compare this to a major shirt sponsor in football, it is considerably less expensive. The team travels frequently around France and across borders to countries of business interest. In addition, the team is actually referred to as Cofidis, beyond just a logo on a jersey as is the case in football.
Though I’m commentating as an outsider, it is my guess and hope that such is the longevity of Cofidis in the sport that they have quantitative and qualitative data to support their cycling investment and the value it provides.

The longer a new stadium goes without a naming sponsor, the harder it is to find one prepared to pay a high fee. Frank Dunne asks why teams from the most watched football league in the world so often struggle to land venue sponsors.
Frank Dunne
30 Jan 2023
Football

AC Milan says the renewal of its front-of-shirt deal with long-standing sponsor Emirates on significantly improved terms is a reward for winning Italy’s Serie A last season and the club's return to the Uefa Champions League.
Ben Cronin
27 Jan 2023

French financial services company Cofidis last month re-committed to a cycling-only portfolio for the next three years after renewing its second-tier agreement with La Vuelta a España and its title sponsorship of the Team Cofidis UCI Continental Tour team.

Operating budgets for the professional cycling teams that compete on the UCI World Tour average out at between €12m to €15m with teams typically funding much of that total from title sponsors or co-title sponsors.

AlUla, a boutique heritage and culture destination in Northwest Saudi Arabia, has stepped up its association with GreenEDGE Cycling by becoming the co-naming rights sponsor of the Australian UCI WorldTour…
SportBusiness Staff
23 Dec 2022
Cycling

The longer a new stadium goes without a naming sponsor, the harder it is to find one prepared to pay a high fee. Frank Dunne asks why teams from the most watched football league in the world so often struggle to land venue sponsors.
Frank Dunne
30 Jan 2023
Football

AC Milan says the renewal of its front-of-shirt deal with long-standing sponsor Emirates on significantly improved terms is a reward for winning Italy’s Serie A last season and the club's return to the Uefa Champions League.
Ben Cronin
27 Jan 2023
Multiple Sports

Coca-Cola has again topped the rankings for sports sponsorship awareness in Spain from a survey of Spanish consumers, despite the absence from its portfolio of one dominant sponsorship property in the country.
Matthew Glendinning
26 Jan 2023