The deal, worth $44m over the next decade, is the longest and most lucrative sponsorship deal in the history of the MLS.

The deal also includes a charity element, with $2.5m earmarked for donation between the Galaxy Foundation and the Herbalife Family Foundation to benefit underserved children.

Herbalife has been an official partner of the Galaxy since 2005 and signed on as the principal and front-of-jersey sponsor in 2007, agreeing a five-year, $25m deal to run through 2011. The renewal, which is actually worth less than the original agreement on an annualised basis, will see Herbalife continue to badge the front of the home, away and third team shirts.

Likely to have been encouraged by the Galaxy’s championship-winning form last season, Herbalife has cited a desire to build more stability in the partnership as the reason for the unprecedented decade-long sponsorship agreement.

“It is hard to maintain a partnership philosophy when every one-and-a-half to three years you are negotiating a renewal,” said Brian McKinley, Herbalife’s senior director of Corporate Alliances.

“Our relationship goes far beyond just the jersey. It is about the true integration of our brand and we wanted a stable partnership."

The Los Angeles Galaxy franchise is owned by Anschutz Entertainment Group (AEG). Given the high-profile nature of the deal, negotiations on behalf of the Galaxy are thought to have been led by AEG’s CEO Tim Leiweke, with support from AEG senior vice president, Corporate Partnerships, Bill Pedigo.

Working on the brand side alongside Brian McKinley was Herbalife’s chief executive, Michael Johnson. 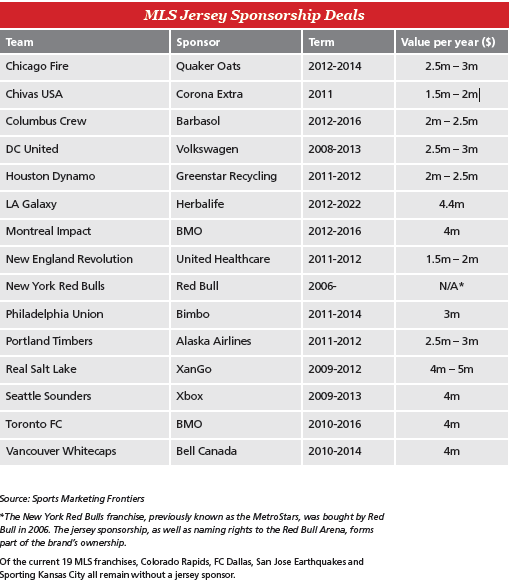 On becoming the principal partner of the Galaxy in 2007, Tim Leiweke said that the signing of global soccer star David Beckham in the same year was the key factor in securing Herbalife’s investment.

With reports surfacing in the 2011 MLS post-season that Beckham was likely to complete a move to Paris Saint-Germain after his LA Galaxy contract expired, rumours of Herbalife choosing not to renew its agreement with the club also came to the fore.

It was announced in January of this year, that Beckham would be remaining a Galaxy player for the next two years. Herbalife’s partnership extension followed in mid-March and, while Leiweke has yet to confirm Beckham re-joining the club as a contributing factor, Sports Sponsorship Insider suggests that the player reaffirming his commitment to the franchise informed both the renewal decision and the valuation.

The N-Score system, created by the Nielsen Company and E-Poll Market Research, rates the brand impact of professional athletes and sports personalities in the United States. With an N-Score of 95, David Beckham was the most marketable soccer player in 2011.

To put that in perspective, the New York Giant’s Super Bowl-winning quarterback Eli Manning N-Scored 98 towards the back end of last year. Los Angeles Galaxy claims that the club’s jersey is the highest-selling shirt in the MLS and one of the most popular in global sport.

Insider’s research cannot support either claim but Beckham’s personal jersey sales figures speak volumes. In his first year with the Galaxy, the club shifted over 600,000 shirts featuring the player’s name, making it the biggest selling jersey in any sport of any player in the world at the time.

Although shirt sales have declined steadily in the years following Beckham’s arrival in California, his influence on the sport in the US has been ever-present, helping to propel the MLS to global popularity and dislodging the National Hockey League (NHL) as America’s fourth most-popular league.

Despite Herbalife seemingly using Beckham as a beacon of its Los Angeles Galaxy sponsorship, the California-based company has never agreed a personal endorsement deal with the star. Beckham’s unofficial association with Herbalife attracts more discussion on social media platforms than the brand’s most high-profile amabassador, Lionel Messi of FC Barcelona.

PepsiCo’s positioning of its Gatorade sports drink brand at tomorrow’s Uefa Women’s Champions League final is aimed at brand building rather than sales, according to the sponsorship lead at the food and b…
Matthew Glendinning
20 May 2022
Football